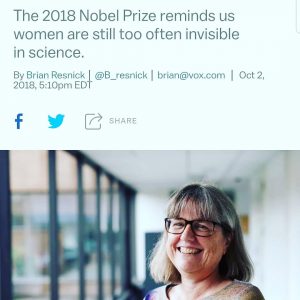 #donnastrickland is the first woman in 55 years to win a Noble prize.

Mrs. Strickland was part of a team that perfected concentrating light energy that could be used to manipulate small objects. One of the applications of this technology is LASER eye correction. Thank you from this #ophthalmologist. #lasik #prk #cataractsurgery#compassionateeyecare #lucentvision
Can you believe #Wikipedia rejected her? 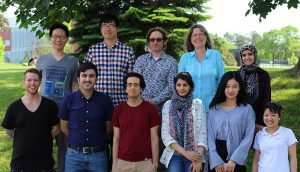 On 2 October 2018, Strickland was awarded the Nobel Prize in Physics for her work on chirped pulse amplification with her doctoral adviser Gérard Mourou.

Strickland and Mourou published their pioneering work “Compression of amplified chirped optical pulses” in 1985 while Strickland was still a doctoral student under Mourou.[9] Their invention of chirped pulse amplification for lasers led to the development of the field of high-intensity ultrashort pulses of light beams. Because the ultrabrief and ultrasharp light beams are capable of making extremely precise cuts, the technique is used in laser micromachining, laser surgery, medicine, fundamental science studies, and other applications. It has enabled doctors to perform millions of corrective laser eye surgeries.[10]Strickland said that after developing the technique they knew it would be a game-changer.[6] Arthur Ashkin, a retired American physicist who worked at the Bell Labs, received the other half of the prize for his invention of “optical tweezers that grab particles, atoms, viruses, and other living cells with their laser beam fingers”.[11]

Strickland is the first female Nobel Physics laureate in 55 years and the third woman in history to win the Nobel Prize in Physics, after Marie Curie in 1903 and Maria Goeppert-Mayer in 1963.[1][12]

Are you sick of dry eyes?

New Dry Eye Treatment is a Tear-Jerker Are dry eyes taking over you life? Our…

Here is why carrots are good for your eyes... Vitamin A Carrots are rich in…

Please fill in the information below and we will contact you shortly to setup an appointment.